Beaujolais is a wine region that is often overlooked, but it nevertheless deserves our attention. The region had been eyeing me for a while but I had never taken the time to stop and spend some time there. When I go to my sister's in Chambéry, in the Alps, I get to drive on the motorway between Mâcon and Lyon, from which we can see the Monts du Beaujolais. In December 2016, I even stayed in a village located at the gates of the Beaujolais vineyard but the fog was so thick then that I did not have the opportunity to go for a walk in the vineyard. I've now done it, since summer 2020, and I haven't been disappointed with the trip! The region is quite close to Touraine, where I live - around 5 hours' drive - which is why we chose this destination for our holidays because we needed to stock up on light and easy-to-drink red wines. It is what the Beaujolais wines are famous for, but they do not come down to that style of wine... nor to Beaujolais Nouveau, the new wine released on the market every 3rd Thursday of November. Here is a quick presentation of the region and some tourist recommendations.

Vines as far as the eye can see

Do you like vineyard landscapes? So Beaujolais is where you should go! Especially in the northern part of the region, where the 'crus' are produced. The Beaujolais vineyard is made of hilly landscapes planted with vines as far as the eye can see. One particularity of the vineyard: it is planted with many old vines pruned using the goblet technique, very close to the ground and without trellising (sometimes the vinegrowers use stakes around which the branches of the vine are tied - but no wire, and the vines are not always planted in rows). It goes without saying that machines can't be used in those plants of land. One can imagine the difficulty for the grape pickers who have to spend the day squatting or on all fours in the vines!

If you are interested in geology, you will enjoy discovering the Beaujolais vineyard, in particular the northern part where the 'crus' are produced. And even if you are not keen on stones, one must admit that the soils covered with granite or shale in some plots of land are really impressive. In the south of the region, the soils, made of  limestone and clay, are also suitable for agricultural crops, as they not soo poor and less hostile to vegetation. To understand the Beaujolais soils better, a visit to the Géoscope on Mont Brouilly is a must: this is an educational site which lists all the rocks found in the region, explains how they were formed and offers a superb view on the vineyard. And if you are in the area, don't forget to go up to the Notre-Dame-des-Raisins chapel, built at the top of Mont Brouilly in 1854 to protect the vines from bad weather and disease. 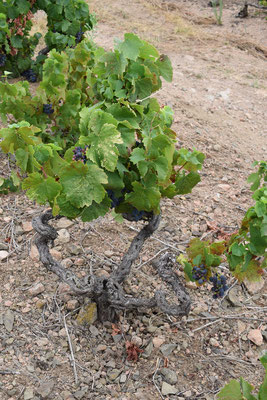 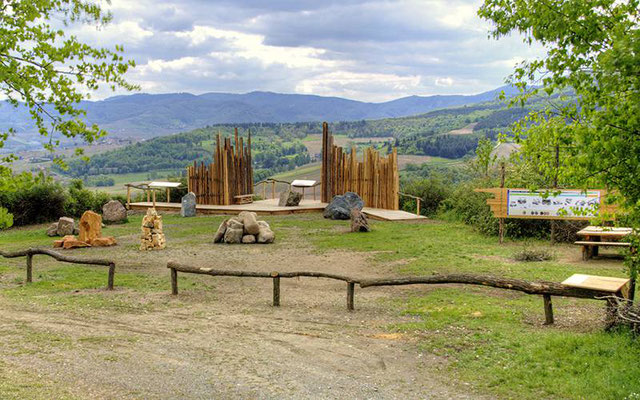 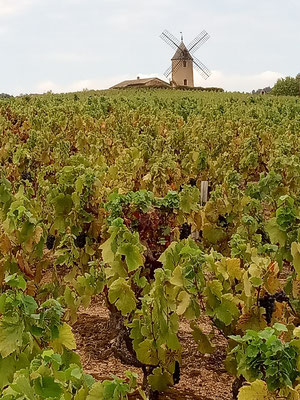 Slow tourism in the Beaujolais vineyard: hiking or biking?

The Beaujolais region is ideal for those who like to enjoy beautiful landscapes and nature while hiking or cycling. One thing you must know before you go: the slopes are steep in some places! The region is located on the foothills of the Massif Central and as their name suggests, the Beaujolais Mountains are made up of hills, covered with vines and sometimes very steep. So if you opt for bike rides, it is better to be a good climber, or to equip yourself with an electric bike. Walking will allow you to have better access to the plots of vines, in which you should not hesitate to venture to observe the soils, wells and 'cadoles' - this is the name given locally to vineyard lodges. You can also sometimes see pretty wells in the middle of the vines. Chapels overlook the highest mountains (such as Fleurie or Mont Brouilly) and generally offer pretty views over the vineyard.

Les Pierres Dorées, in the south of Beaujolais

In the south of Beaujolais, the vines are more scattered and share the landscape with agricultural crops, thus recalling the vineyards of Gaillac or Cahors, but also Tuscany. The region takes its name from the stones used here for construction - light ocher colored stones which in the rays of sun take on orange, yellow, red, pinkish tints. This "yellow stone", as the ancients called it, is colored by iron oxides and is relatively easy to work, which explains why it was widely used for constructions in the Beaujolais and the Lyon regions. In the 'Pierres Dorées' (i.e. Golden Stones) region is located the only village listed as 'Most Beautiful Villages of France' in the Rhône department: Oingt. Other villages are also worth visiting: Theizé en Beaujolais (with its two castles, its church and its chapel), Bagnols en Beaujolais where time seems to have stopped. One feels like a foretaste of the south of France when strolling through these villages.

A restaurant I recommend: L'Auberge du Cep in Fleurie

There is one restaurant not to be missed in Fleurie: L 'Auberge du Cep, located on the village square. We had dinner there on our first evening in Beaujolais, and it remains our favorite of the stay. What you should expect: a dining-room with refined decoration, a discreet but warm welcome and a search for flavors in the dishes that really thrilled us. With this meal, we drank a Morgon from Marcel Lapierre's, a family estate that works its vines biodynamically and produces two unfiltered Morgon vintages each year: one without sulfites, the other with very little sulfites. The first is only sold if customers can transport it and store it in good conditions: if the outside temperature exceeds 14 ° C, the bottle will not leave the cellar! 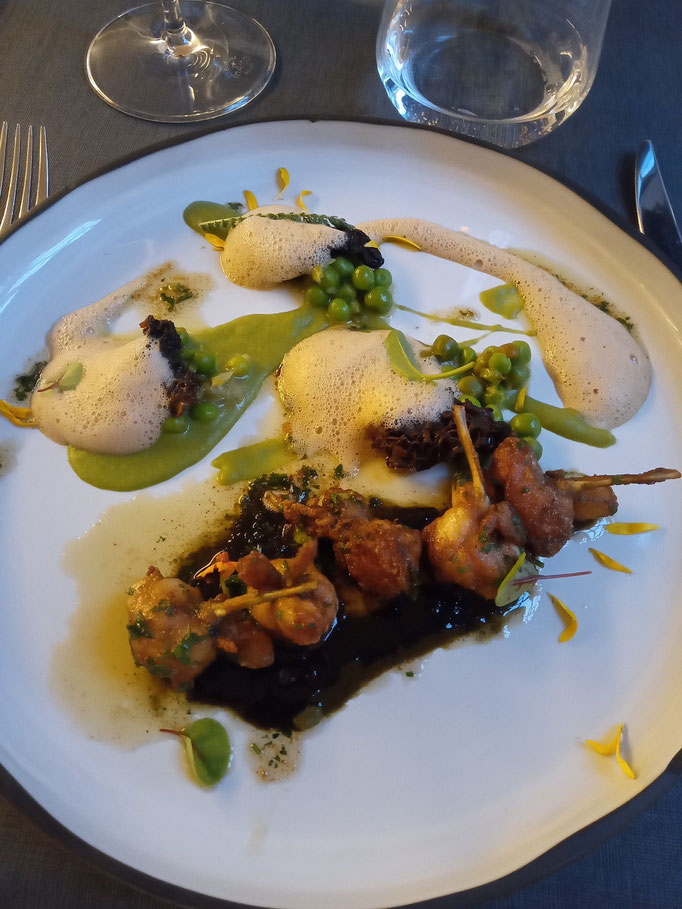 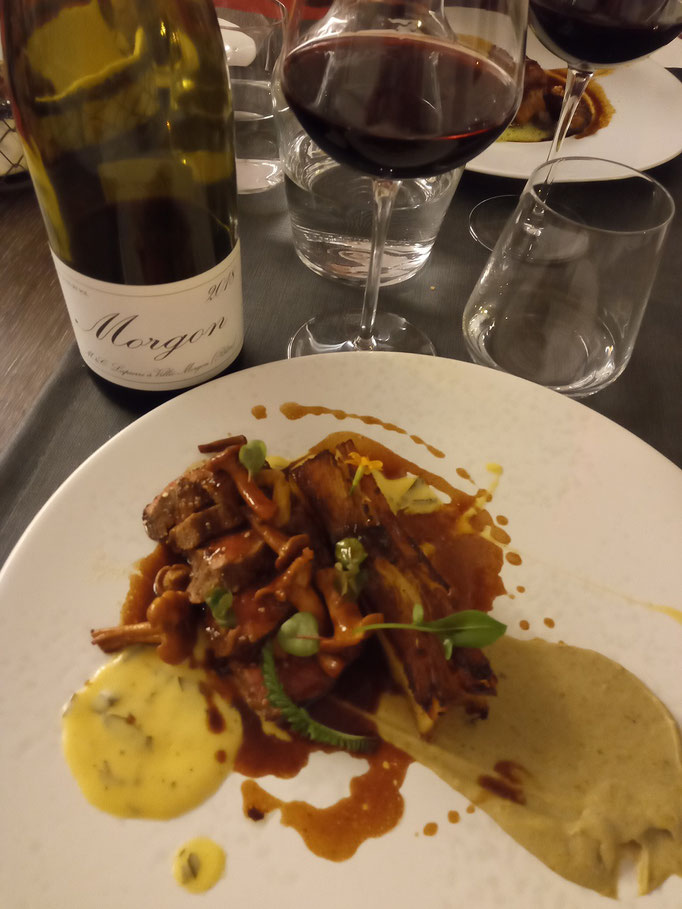 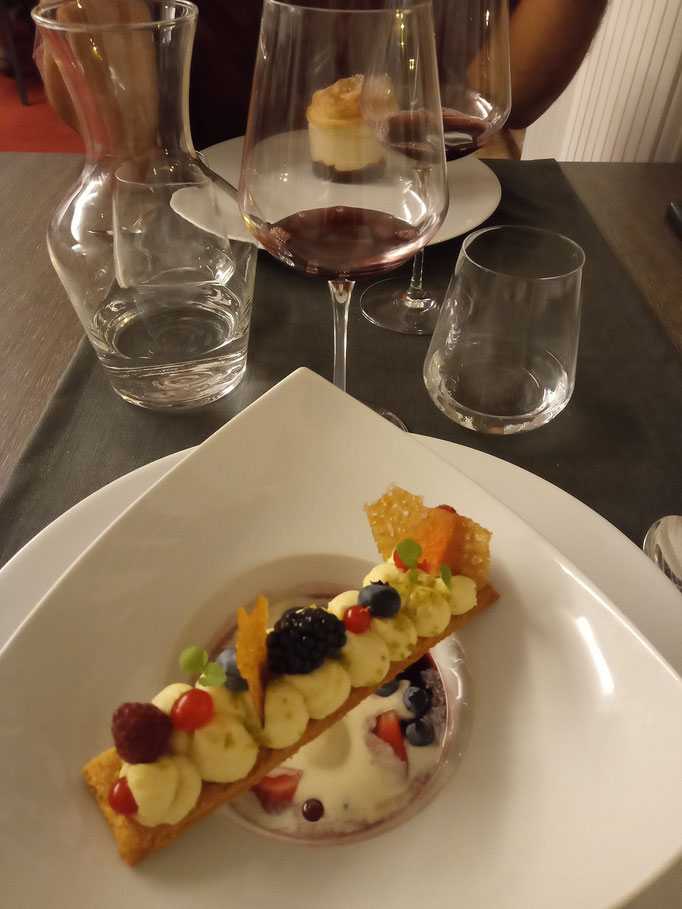 We could not end this article without mentioning the wines produced in the region. Gamay Noir is the most widely planted grape variety in Beaujolais (98% of the grapes grown there). It gives wines that are generally light, with low tannins, little color and high acidity, with pronounced aromas of red fruit (cranberry, strawberry, raspberry) and flowers (iris, violet, rose). AOC Beaujolais and Beaujolais Villages (in purple on the map below) represent the majority of the region's production. They are mainly available in red wine, but rosé wine and white wine made with Chardonnay are also produced. Pinot Noir, Aligoté, Melon de Bourgogne and Pinot Gris can be part of the blend, up to 15%. They are not blended in the cellar but are co-planted, that is to say grown on the same plot of land - a practice widely used in French vineyards in the past.

There are ten of them, all located in the north of the region. Only red wines from Gamay are produced. Do you know their names? Here is the list, each cru having its own particularities:

- Saint Amour: the essential wine for Valentine's Day! The village, located just 3 km from Pouilly (in the Macônnais region), is also home to a starred restaurant, run by a Japanese chef and named 'February 14'

- Juliénas (we do not pronounce the final -s, as for Chénas), town and appellation whose name comes from Julius Caesar, who stationed with his troops in the region during the Roman conquest.

- Chénas, the smallest of the crus, and the one which, with Morgon and Moulin-à-Vent, has the longest ageing potential

- Fleurie: the most feminine of the crus, with wines often said to be floral

- Moulin-à-Vent, which takes its name from a mill listed as a historical monument in 1930, is nicknamed 'the King of Beaujolais', because its wines are the most tannic and full-bodied

- Chiroubles: the most representative of Beaujolais, with light, fruity and delicate wines

- Brouilly: the largest of the crus (20% of the surface area are dedicated to this cru)

- Côte de Brouilly: the vines are planted on the four sides of Mont Brouilly, in the heart of the AOC Brouilly.

There are a great many wine estates in the region, located in villages and hamlets scattered throughout the vineyard. We visited two estates during our stay, that had been recommended by friends who also work in the wine business.

- Domaine Dominique Piron in Villié-Morgon offers a wide choice of wines. Among our favorites, the 2016 'Quartz' cuvée, AOC Chénas: a surprising discovery when you think that Beaujolais wines are only light wines, easy to drink and to consume in their youth. Here is one which has character, tannins, a beautiful aromatic complexity and minerality, and which will also be a wine to keep (7-8 years).

- Château Thivin in Odenas, at the foot of Mont Brouilly. Unlike many Beaujolais winegrowers who offer a wide range of crus, the Geoffray family has chosen to focus on the production of AOC Brouilly and AOC Côte de Brouilly. They separate the grapes grown on their different plots of lanc, so as to reveal the different terroirs. We liked the whole range of wines, they all had a lot of elegance and finesse, and the choice was difficult when it came to buying. A favorite anyway: AOC Côte de Brouilly, cuvée 'Les Griottes de Bruhlié' 2018 - the pure expression of Gamay, with aromas of red and black fruit, spices, and minerality for this wine made from vines planted on the famous 'blue stones' of Mont Brouilly.